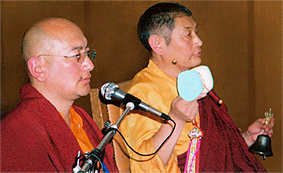 Tulku Nyima Gyaltsen Rinpoche, a highly revered lama, has come to the Bay Area on three occasions to offer teachings at the invitation of TOC; his first visit was in 2005.
Born during the Water Horse year (1942) in Kham, as a young child Tulku Nyima was recognized as the speech reincarnation of Khenpo Ngagchung. Later he mastered teachings from Khenpo Munsel as well as many other great teachers. Since 1985 Tulku Nyima has been Abbot of several different monasteries in Tibet. In 2003 he founded Sakya Dokho Choling, a Maryland-based group dedicated to the study and practice of Tibetan Buddhism. 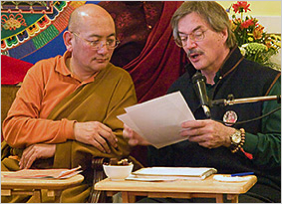 Dr. Robert W. Clark, shown here conferring with Rinpoche, has served as his translator and assistant for over a dozen years. During this time, Dr. Clark and Rinpoche have also produced a variety of Tibetan Buddhist publications.

Following are the texts on which Rinpoche has taught in the SF Bay Area during recent years:

The Nectar of Manjushri's Speech by Kunzang Pelden

Extracting the quintessence of accomplishment – Oral Instructions for the Practice of Mountain Retreat – expounded simply and directly in their essential nakedness by H.H. Dudjom Rinpoche

Parting from the Four Attachments by Sachen Kunga Nyingpo

The Heart Treasure of the Enlightened Ones by Dza Patrul Rinpoche

Vast as the Heavens, Deep as the Sea: Verses in Praise of Bodhicitta by Khunu Rinpoche

Ballet of the Lotus Garden by Dza Patrul Rinpoche

In 2009 Rinpoche bestowed the Bodhisattva Vow

Turning the Wheel of Dharma

The obstacles to attaining a state of enlightenment, or even progressing in that direction, are complex and extensive, as one must go beyond both the pervasive corruptions of this world as well as the insidious defilements of the mind itself. Understanding this, Sogan Rinpoche relied from his early years on a spiritual teacher who had the unmistakeable signs of the wisdom that transcends this world and the great compassion to return to guide others.

Accordingly, Sogan Rinpoche counsels his students to recognize these signs so as not to follow unqualified teachers to undesirable destinations. As we take on the qualities and characteristics of the teacher to whom we are devoted, relying on an unqualified teacher is like habitually ingesting poison, whereas relying on a fully qualified spiritual teacher is like finding a treasure of unlimited happiness. The authentic teacher must be pure in maintaining his vows and spiritual commitments, including pratimoksa, bodhisattva and tantric vows. He must have deep and extensive knowledge of the teachings of the sutras, shastras and tantras, including not just theoretical understanding, but the inner knowledge that comes only from extensive practice and full accomplishment of these teachings.

Having internalized and actualized these teachings, his compassion for all beings should be readily apparent in his loving concern for whomever he encounters; in his speaking the truth with gentleness and effectiveness; in his teaching each person in a timely and appropriate manner; in his lack of favoritism or partiality; in his generosity towards all, whether human, animal, or other; and in his inner attainment of the Dharma as manifest in all aspects of his actions, words, and thoughts.

In 2008 and 2009 Sogan Rinpoche took extended trips to Cian Ciub Cio Ling, a dharma center located in northeast Italy in the village of Polava di Savogna. While there, Rinpoche led retreats and offered several teachings, including Powa and Treasuries of the Nying T'ik Preliminaries.

After those visits several of Rinpoche's students in Italy requested that he become their spiritual guide and in 2012 they formed a dharma group called Tupten Osel Ling. 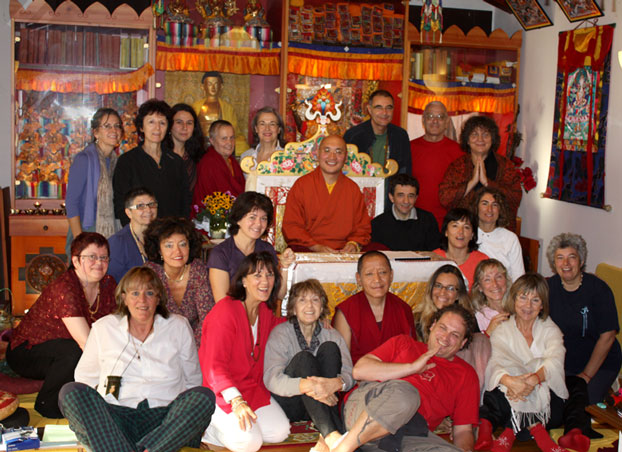 Rinpoche and students at Cian Ciub Cio Ling in 2009

Rinpoche and retreat attendees gather for a photo at the completion of a silent, seven-day residential retreat sponsored by TOC during the fall 2019.  Rinpoche shared precious instructions on a compilation of teachings given by Khenpo Ngawong Palsang (Khenpo Ngakchung) to his disciple, Nyshol Khandro, Samten Dronma, Quintessential Instructions Sealed Within the Depths of my Heart, secret words meant for continual practice (Tukdam Narma). These teachings cover the entire range of Buddhist contemplation. 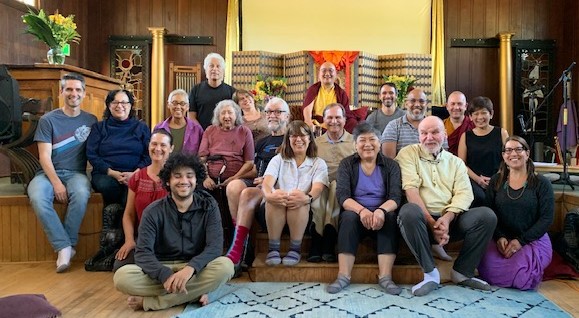 Rinpoche and students during the 2019 retreat

In accordance with the Buddhist custom of saving the lives of beings facing imminent death, TOC has sponsored releases of birds and fish back into their natural environments.  Sogan Rinpoche presided over many releases of animals; to learn more about these releases, please visit the galleries.