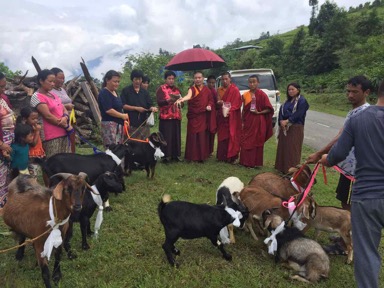 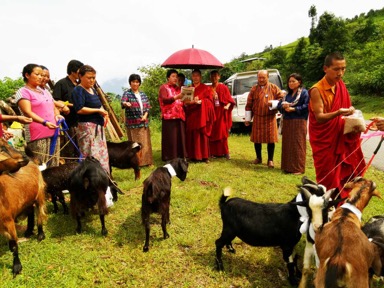 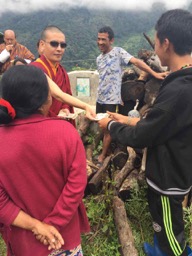 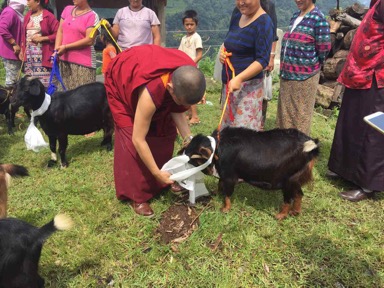 This year (2017), corresponding to the time when much animal sacrifice is performed in Nepal, I am exceedingly happy to have ransomed the lives of many helpless animals that were destined for slaughter. I want to thank all of my Dharma friends who supported this important work and made it possible along with Tulku Thubchö who completely shouldered all the responsibility for the animal liberation this year.

I make heart-felt prayers that the merit from this virtuous act become a cause of happiness and peace for all beings everywhere throughout the world; for the spread of the Buddha’s teachings; and for the increase, like the rising of a full moon, of the wisdom activity of all noble beings who uphold these teachings.

The details of the animal liberation is that 12 goats were rescued for a price of Nu:50,000:

Also, we found that Druk Karzey Tshogpa was in the process of rescuing 10 cows for the cost of Nu:150,000. They had rescued some cows by paying Nu:100,000 but had not been able to rescue all since Nu:50000 was insufficient for them. So here we donated Nu:50,000 to help them rescue all the remaining cows. Also, we donated Nu:100,000 to Druk Karzey Tsogpa to help them buy food and drinks for the animals. The rescuers had to travel around 7 hours to reach the nurturing house. This also cost a lot for for their travel, food and lodging. So I have also paid all these expenditures for the rescuing team. Actually it cost Nu:15,000 to reach the goats to their destination, but with the help of Mr. Tshering Nedup, owner of Ghangjong Tshongkhang Phuntsholing, I paid Nu only 7,800 for the fuel cost & fooding/lodging for drive.

Now we have a Nu:45,851 in the bank in Bhutan for future animal release.  Again thank you all for join me this important event. 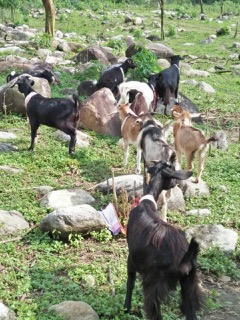