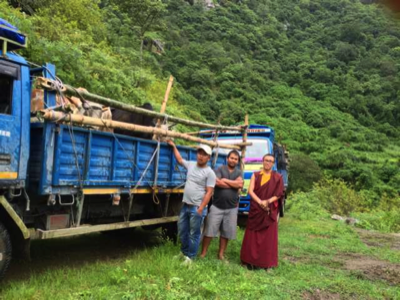 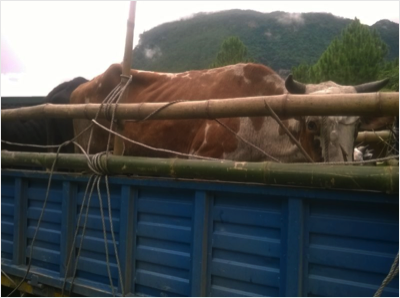 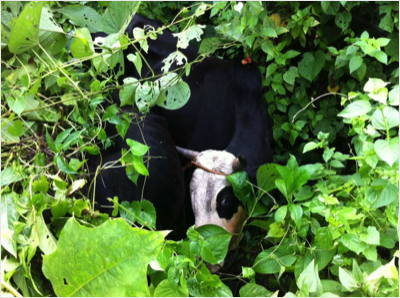 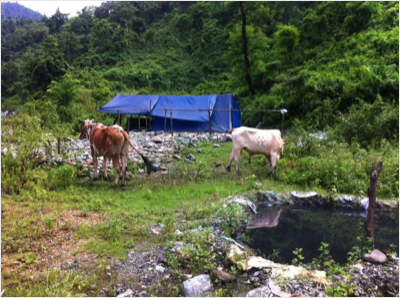 Cows and oxen were saved from slaughter and transported to Phuentsholing, a sanctuary for ransomed animals in Thimphu, Bhutan

The Animal Release event on the Chokhor Duchen i.e 20 July 2015 went successfully. The Animals were transported to Thimphu on the 19th July from Phuentsholing without much difficulty on the way. Khen Rinpoche Yeshi Gyaltshen and his team from Paro travelled to Thimphu in the early hours of the next day. Khen Rinpoche blessed the animals along with a khadhar (white scarf) for each animal and the team members fed the animals with grass and water.

At Thimphu we made it a point to meet with a staff from Jangsa Animal Saving Trust and asked him to brief the truck drivers as they had to travel all the way to the far east of Bhutan. We also handed over to him a sum of amount Nu. 20,000 as donation for the Jangsa Animal Saving Trust to support the new lot of animals and the existing animals under their care and to pay for the care-takers as they have expressed their difficulty with regard to funds. They say as of now they don’t have a steady source of fund to sustain this activity, however, they are in the process of exploring areas to curb this issue.

To everyone’s delight, the animals were safely reached to the sanctuary the Jangsa Animal Saving Trust allocated to us, on the late evening of 21 July 2015. We were told that two monks had come to receive the animals at a place just before reaching the sanctuary. That area is supposed to be the best compared to other areas they have. It is supposed to be very vast and the community there are very supportive I believe, and no risk of wild animals attacking the animals. The name of that place is called Tsori, under Lhuentse District, Bhutan. Just to let everyone know that the two young truck drivers were very caring and considerate and saw that they took good care of the animals on the way.

On behalf of Khen Rinpoche Yeshi Gyaltshen and his team from Bhutan, I would like to thank Sogan Rinpoche for giving us an opportunity to be a part of this marvellous activity and we would also like to extend our deep appreciation and thanks to all the sponsors from USA and Italy for saving lives of animals with your generous contribution.

P.S We have a balance amount of Nu.50,000/- so as per Khen Rinpoche’s advice and instruction we opened a Joint Fixed Deposit Account for 1 year. Please find a copy of it attached herewith.