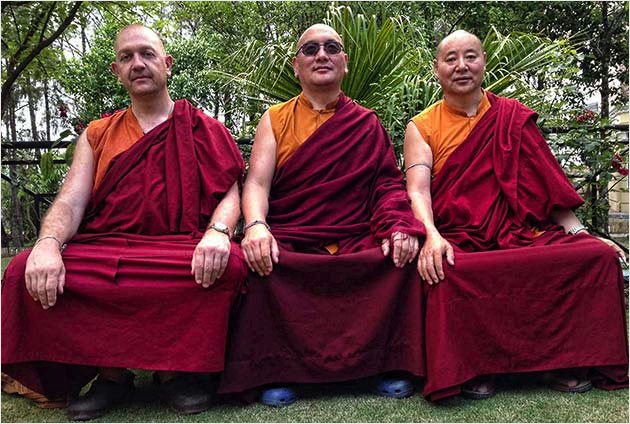 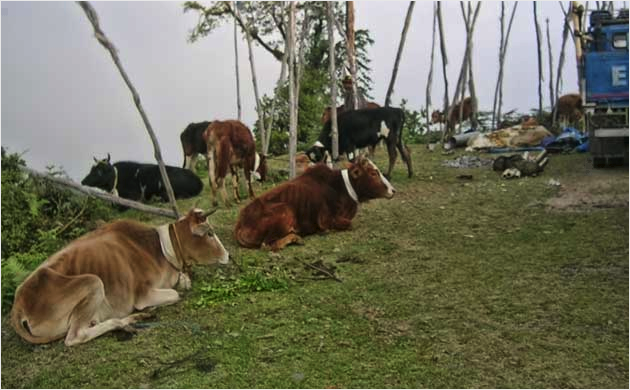 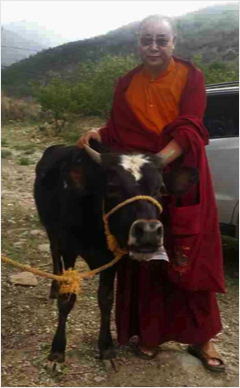 Khenpo Yeshe Gyaltsen in Bhutan at the May, 2014 animal ransoming.

Forty cows and oxen were saved from the butcher's knife and transported to Osellong, a sanctuary for ransomed animals in eastern Bhutan

As you know I’m back to Dharamsala now. I have received all of your donations for the ransoming of animals' lives. Thank you so very much.
The total amount I received was Rs 250,000 ($4,267.50), received from Bhutan, India, Nepal, USA, Italy and Indonesia.

I found out that it isn’t easy to ransom the lives of animals in Nepal. It isn’t safe and the conditions for the animals to live without fear of capture are scarce. As such I asked my friend Khenpo Yeshe Gyaltsen (Senior Tutor to Kyabje Dilgo Khyentse Yangsi Rinpoche) to release animals in Bhutan.

We were able to release 40 cows and oxen which filled four trucks. They were ransomed on the 15th of the third month of the lunar calendar (The most important and auspicious day according to the Pali tradition of Buddhism. Equivalent to the 15th of Saka Dawa [4th Month] of the Tibetan tradition.) May 14, 2014, and were transported from Thimpu (The capitol of Bhutan) to Osellong, in the East of Bhutan (a distance of three days drive) where there is a special place where the animals can live out their lives in peace; being cared for by an organization which protects and looks after ransomed animals.

As you all know I ransom the lives of animals annually. This year, however, things came together so very well and with such auspiciousness. I hope you will all join me in rejoicing in this wonderful accomplishment!