Throughout centuries of Buddhist development in Tibet, the majority of spiritual masters have been male, but some women did reach high levels of realization, becoming accomplished practitioners and important teachers. One of the greatest we know about was Sera Khandro. She was born in Lhasa in 1892 but at the age of sixteen, after experiencing powerful visions, she escaped from her upper class life in Lhasa and traveled to Golok, high on the plateau of eastern Tibet.
She spent the rest of her life in Golok and despite encountering tremendous obstacles and difficulties, she persisted in her practice and became a powerful spiritual teacher with many disciples. A renowned Treasure revealer, an especially unusual role for a woman, she taught not only her own Treasure teachings but also those of others including her guru and consort, Drimé Özer.
When she was in her early thirties, she reached a critical point turning point in her life when Drimé Özer suddenly passed away. Before he died he asked his heart son, the fourth Sogan Rinpoche, Natsok Rangdrol, to take care of Sera Khandro and bring her to Sera Monastery. Her name, Sera Khandro, reflects the importance of her connection to Sogan Rinpoche and the significance of the time she spent at Awo Sera. Her autobiography is one of her accomplishments of that period and for later generations of practitioners, it is a vitally important document.
Thank you to Sara Jacoby Ph.D., Assistant Professor of Religion at Northwestern University, who shared the photos of Awo Sera shown on this page. She has explored the life story of Sera Khandro in depth and translated her remarkable autobiography, available on Amazon.  For more information, click HERE.

Founded by Rinpoche during his first incarnation as Sogan Rinpoche

Awo Sera Monastery, known officially as Sera Tegchen Chokor Ling – The Abode of the Mahayana Dharmacakra at Sera – was founded by the First Sogan Rinpoche, Boom Schul Lama Sonam. He established the monastery in the Sera district of Serta in the year 1736. After this, the Second and Third Sogan Rinpoches continued to develop the monastery in that place. 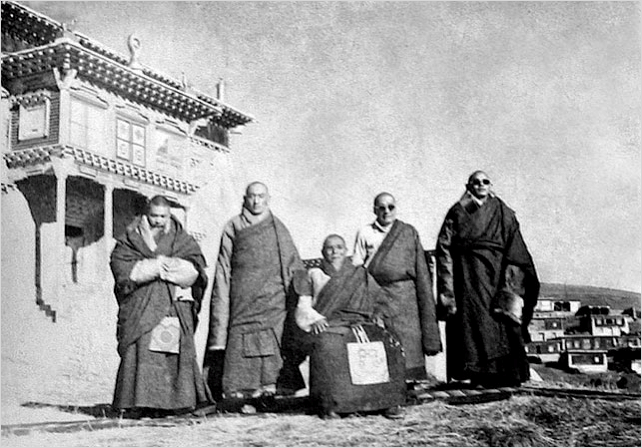 The lamas of Awo Sera Monastery with Sogan Rinpoche at the time of his enthronement as the Sixth Sogan Rinpoche, 1985. From left: Tulku Richen Trangwa; Sogan Rinpoche; the great master and terton Sera Yang-trul Rinpoche (Sangak Drodul Lingpa) (seated); another lama of Awo Sera; last figure at the right is Sera Jigga Tulku.

The fourth Sogan Rinpoche was Natsok Rangdrol. He was born in 1869, the Earth Serpent year of the 15th Tibetan calendar cycle, as the son of Prince Sonam Dorje, the ruler of Wel-schul. He was guided in his studies by the great teachers of the time such as Tulku Drime Öser (also known as Rigdzin Sang Ngak Lingpa) and Terchen Dujom Lingpa (Pema Ledrel Tsel). He proceeded to distinguish himself in the attainment of high status both as a scholar and a practitioner. At Awo Sera Monastery he established a retreat center whose main focus was the practice of Terchen Dujom Lingpa’s profound treasure text (terma) Buddhahood Without Meditation.
Urged by gods and lamas, Natsok Rangdrol moved the monastery to Nyilung Chutri Laka (snyi lung chos khri’i la kha), in the Khros Khri district in the valley of the river sNyi. He built an entirely new structure and invited a new compliment of divine images to reside there. Although no longer in the Sera district, the monastery retained that name and is still popularly referred to as Awo Sera. Awo is the name of the nomadic grouping that is centered in the area that includes Sera. In his own realm of Wel-schul/Serta, and in many adjacent kingdoms, Natsok Rangdrol established the ten virtues as the custom, and in many ways, as the law of the land. He became the personal lama of the powerful King of Derge in Kham.
Again, at the persistent urging of gods and lamas, Natsok Rangdrol accepted the Dakini and highly accomplished Tantric adept Dekhyong Wangmo (1892-1940) as his “secret friend.” They joined forces and were thereby able to extend to all directions the teachings and virtuous work of their two great lamas. This great and venerable master of the sublime teachings and practices, Dekhyong Wangmo, is known also by another name: Sera Khandro. This is because after becoming the secret friend of Natsok Rangdrol, she remained at Awo Sera for many years teaching and revealing terma to an ever-growing circle of disciples. For more on Sera Khandro, see the article on the left.
There are also biographies of Natsok Rangdrol that detail some of his great accomplishments and deeds, such as the time when the powerful Moslem warlord Ma Pu-feng (1903-1975) massed his hordes of well-armed soldiers on the borders of Serta in preparation for a long-planned invasion. Natsok Rangdrol proceeded to the sacred mountain of Drongri Mukpo (‘brong ri smug po) in the valley of Serta. There he accomplished the esoteric Vajrakila rite of expulsion which caused Ma Pu-feng to flee for his life, and never to approach Serta again.